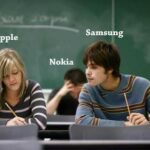 Since the decision in favour of Apple was passed down in the courts, I’ve seen a lot of their fanboys posting this picture, as well as sentiments to the effect of the decision proving that Samsung stole design ideas from Apple. Since I don’t work for either company, I can’t say for sure what happened, but I do know that, while Apple has done an excellent job of putting things together that are user-friendly (in a mostly-benevolent dicatorship kind of way), the vast majority of the patents they were suing over were things that should never have been allowed to be patented in the first place!

The patent that was considered the core of the case was around “the ornamental design of an electronic device, accompanied by nine figures depicting a thin rectangular cuboid with rounded corners.” Yes, that sounds like an iPhone, or even an older-model iPod. But really, they got a patent on a rectangle?

Ok, let’s take a step back here, and look at what a patent is supposed to be. The generally accepted rules for patents in the US are that the object:

If we look at the idea of the patent that is supposed to be the heart of this case, does it meet these requirements?

So, based on the 4 basic criteria of patents, Apple’s patent probably shouldn’t have been granted. According to court documents, it was proven that Samsung actively watched what was successful on the iPhone, and tried to copy it, which naturally would violate the patent. However, the patent clearly should never have been granted, so are they in the wrong, or did they simply let Apple do some R&D for them for free? It seems like the latter to me, and since when is that frowned upon in a capitalist system?

In the end, Samsung lost their legal battle based on a faulty decision in the patent office. Unfortunately, Apple isn’t the only one to take advantage of this broken system. Microsoft, IBM, and Google have all successfully filed patents that most would find ridiculous. Clearly, a serious re-consideration of how the patent office works (especially in the US) is needed.