I was digging through the freezer last weekend, and came across a decent-sized chunk of moose meat, and thought “hey there, weekday dinner!” For those of you who don’t know, I love moose – it’s lean, nice to cook with, and (most importantly) tasty. The recent post on The Moose Curry Experience had been percolating in my brain for a few weeks, and then it hit me – TAGINE. 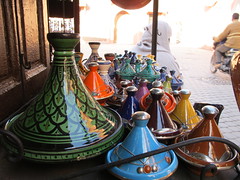 Tagine is a North African slow-cooked stew, made with lots of fragrant spices, onions, and fruit. Yes, fruit! Most commonly, dried prunes and dates are used, though I’ve seen recipes with dried apricots as well. Of course, moose aren’t exactly plentiful in Morocco, which is where most people associated tagine with, so my initial searches turned up little in the way of a recipe. I decided to base my own recipe on a Beef Tagine recipe I came across, since moose can often be a substitute for beef. 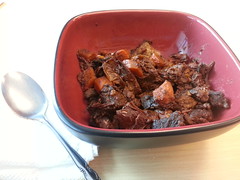 Since I pretty much stuck to the recipe, I won’t post all the ingredients and steps (you can see them at the link above), but here are a few of my observations:

Have you tried anything interesting with moose? If so, post about it in the comments!