It’s been a while, so here are a few updates on the various projects I’ve had on the go:

Centennial SMaSH 1-Gallon Brew
Bottling this proved to be a bigger challenge than I had anticipated. I ended up with a lot of trub (the technical term for the dead yeast and hop debris at the bottom of the fermenter) in the bottles, and I tried to pour the beer from the 1-gallon carboy in to the bottles, using a funnel. Big mistake. I’m fairly certain I ended up wasting half the batch, and the bottles have way more trub in the bottom than I would like.

Flavour-wise, the beer came out nicely. The hops came through brilliantly, although with age the flavour has dulled a bit. The colour was a bit odd – I was expecting a fairly light colour, but it ended up a reddish-brown. Still, a great first experiment with all-grain. Seriously considering taking another stab at it, after I finish the Brew House Pale Ale kit I started a few weeks ago.

Speaking of which, I decided to hack this kit, like I hacked the last one. This time, I decided to dry-hop it – twice! I added an ounce of Cascade hops when I first started, and another ounce about two weeks ago. I’m very curious to see what the results are.

Cold Coffee
The weather has warmed up enough to start doing cold coffee again. I didn’t realize just how much I missed it!

A Seedy Underbelly
The only successful seed starts for me this year were the tomatoes and peppers; the onions just would not get going. I suspect the problem may be that my seed is too old; I’ve noticed a few people mentioning that it doesn’t tend to last long. My plan at this point is to plant out the tomatoes and peppers next week, since there likely won’t be any frosts for a while. I’m also planning on starting a few fall crops indoors this year; broccoli and the like. We’ll see if I have time though! 🙂

Garden Planning
Despite the late start to the season, the garden is on a roll. In addition to the 3 raised beds, I’ve got a couple of window boxes set up on the deck with herbs, including several that I purchased from Richters Herbs. I organized a few folks here in St. John’s to do a group order, so that we could split on the shipping, and for the most part it worked out very well. I’m thinking of doing it again next year! I also purchased a “North Star” sour cherry tree, as a Father’s Day gift to myself. There’s a lot to learn about pruning and the like, but it seems like a lot of fun. 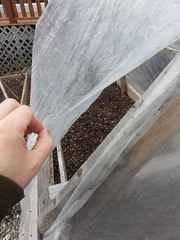 I’ve been giving some thought recently on how to extend my season, in no small part thanks to a workshop put on by Dan Rubin of Perfectly Perennial that I attended back in April, and have been sketching out a few ideas on how to build some cold frames, as well as a greenhouse. All of my designs have gone through several iterations, but I think I’ve got a good handle on them now. My main goals are to make them as simple as possible, keeping in mind the tendencies of my yard in the winter.

I’m also looking at running a group order of garlic this year; I didn’t plant much last fall, but so far everything I planted seems to be growing well. I’m reconsidering the location of my planting though; the bed itself may end up with more of a perennial focus than I had originally thought. Maybe I need to build some more raised beds…