As is my custom, here is my annual end-of-year/new-year post. Enjoy! 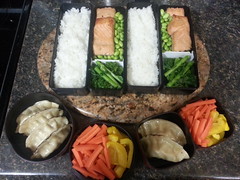 Looking over my posts from the last year, it seems like the focus of a lot of my writing (and thinking…and doing…) revolved around food and drink; from making Moose Tagine, to brewing beer, I’ve had one heck of a gastronomic year.

Test for 3rd Kyu in Aikido: Done and done. In fact, this was the first test I felt like I mostly nailed since my 6th Kyu.

Grow more food: A year of hits and misses. My seed starting efforts didn’t pan out the way I would have liked, and I planted the tender stuff (tomatoes, peppers, etc) way too late to get more than a handful. On the other hand, the garlic did fantastic, as did the peas.

Blogging/vlogging more regularly: A mix; I did manage to post pretty regularly for a while, but fell off the bandwagon.

Brewing my first all-grain batch of beer: Done! I learned a great deal from making this first, small batch of all-grain beer, in no small part because there were a lot of challenges I hadn’t anticipated. Bottling in particular was a challenge; I ended up with a lot more waste than I would’ve liked, and am fairly certain I ended up with at least a couple of infected bottles.

My 2015 goals are actually very similar to the ones I set for 2014, to try and capitalize on the progress of this last year.

Test for 2nd Kyu in Aikido: I feel like doing well on my test earlier this year has renewed my motivation, and helped me focus my practice a little better. If everything goes well, I should be going for this in May.

Grow more food: Already started on this one; I ordered a fair bit of garlic from The Cutting Veg this year, and it’s all in the ground. I’m going to take another stab at starting seeds, and hopefully what I learned from last year’s failures will help.

Blogging/vlogging more regularly: I did ok last year, but ran out of steam. With some further planning, I think I may be able to do better this year.

Making all-grain beer more often: After purchasing a used brew pot from a co-worker, I’ve decided that it’s time to move in the direction of 5 gallon batches of all-grain beer. Hacking BrewHouse kits is a lot of fun (I’ve got one on the go right now), and I think that the control one can get with all-grain will be even more fun.

One Response to "A Year of Food and Drink"