Until recently, my standard weekday breakfast was a bowl of cereal. Pretty much, whatever was on sale, as long as it wasn’t super sugary. Over the last year or so, I started noticing that it really wasn’t a sufficient breakfast – I would eat around 7:30, and be hungry by 9 or 9:30. I tried eggs, but found the same problem. Eventually, through a bit of trial and error, I figured out that the problem was that I needed a good dose of both complex carbs AND protein. Unfortunately, my preference for sleep means that getting up to make myself a big breakfast is a non-starter, so I needed to find something that I could make ahead, and would contain all the carbs and protein I needed to get through to lunch without wanting to eat my own arm off.

When I was a kid, my dad used to make this occasionally for us. It’s basically a porridge of wheat, rye, and flax. Not exactly exciting stuff, but short of eating grasses, probably the least processed way of getting complex carbs. However, while this would stick with me longer than a bowl of cheerios, it still wasn’t quite enough. A couple of years ago, I rediscovered it, and started cutting it with a bit of steel cut oats, mainly because I don’t particularly like them on their own. I’ve also been adding fruit, just to give it a bit of sweetness. Over the holidays, I was talking to my dad, who eats Red River all the time now, and he mentioned that he had started adding almonds while it was cooking.

A light went on – I add fruit, why not nuts? For that matter, why not seeds, and whatever else I feel like?

A couple of weeks ago, I made a trip to Bulk Barn to pick up some almonds, and started wandering the aisles. I already had some fruit (Virginia bought me some dried sour cherries – SO tasty), but what else could I add. I ended up picking out a few little treats. Basically, my mission was to make it both healthy and tasty. 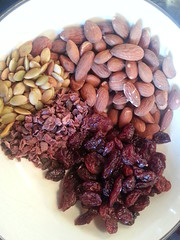 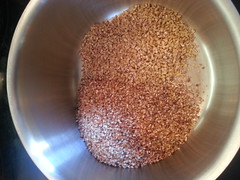 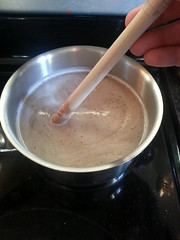 The best part is, it’s just as good reheated in the microwave. About 30-45 seconds.